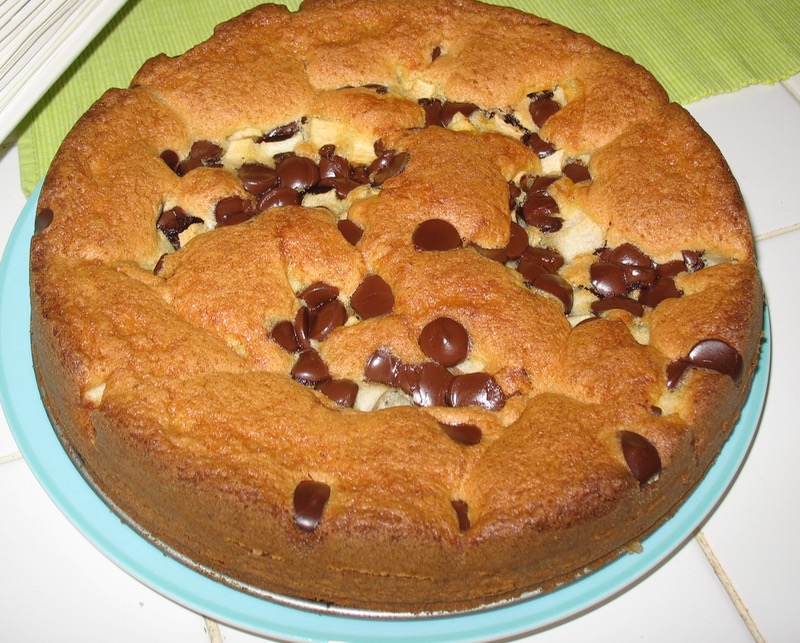 I found this one on one of my food blogs, who got it from another food blog, who got it from the restaurant that invented it.  While the original dish called for pears, I didn’t have any pears, so I used apples. If you do this, sautee the apples slightly, to the consistency of — what else? — pears.  The secret ingredients in this cake are brown butter and whole eggs that are beaten to the point of forming stiff peaks. When combined, they give the cake its springy texture and subtle nutty flavor. Serve this cake with whipped cream with a bit of almond extract.

Update: I made it again last night for the 21st Anniversary of Our First Date (an occasion if there ever was one) and used pears (Bosc–ripe, not crisp) and bit too many chocolate chips and IT WAS DIVINE.  We didn’t even use the whipped cream,  as it went freshly out of the oven and into Anniversary mouths.
(Makes one 9-inch cake, which serves about eight people)

Lightly whipped cream with a touch of almond extract (optional)

Preheat the oven to 350°F. Butter a 9-inch springform pan and dust with flour; set aside. Stir the flour, baking powder and salt together, set aside.

Using a mixer fitted with the whisk attachment, whip the eggs on high speed until pale and very thick. (It will take about nine minutes to get sufficient volume–just below Stiff Peak Stage.)

While the eggs are whipping, brown the butter. Melt the butter in a medium saucepan (because it will foam a lot) and cook it until the butter browns and smells nutty (about 6 to 8 minutes). It helps to frequently scrape the solids off the bottom of the pan in the last couple minutes to ensure even browning. It turns all-of-a-sudden, so be ready.  Remove from the flame but keep in a warm spot. (I poured the butter into a spouted measuring cup for the next stage.)

Add the sugar to the eggs and whip a few minutes more. Just as the egg-sugar mixture is starting to lose volume, turn the mixture down to stir, and add the flour mixture and brown butter. Add one third of the flour mixture, then half of the butter, a third of the flour, the remaining butter, and the rest of flour. Whisk until just barely combined — no more than a minute from when the flour is first added — and then use a spatula to gently fold the batter until the ingredients are combined. It is very important not to over-whisk or fold the batter or it will lose volume.

Pour into prepared pan. Sprinkle the pear and chocolate chunks over the top, and bake until the cake is golden brown and springs back to the touch, about 40 to 50 minutes, or a tester comes out clean. (Try this a few times to make sure you’re not hitting a pocket of pear.) Serve with whipped cream.

Note: After licking the bowl, I decided it didn’t really matter what kind of fruit I used, as the batter had this amazing taste.  I used Ghirardelli bittersweet chocolate chips.