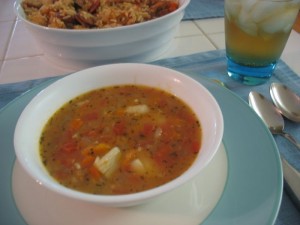 When I saw this recipe in the New York Times (recipe by Mark Bittman), I knew it would work beautifully with what I’d planned to serve for Super Bowl Sunday: Cajun Jambalaya.

Bittman said it was  lighter gumbo, and the seafood was scallops, rather than the shell fish and bivalves I’d seen in other recipes.  The only place I wondered about was where he said to cook the roux, stirring constantly, until it darkened.  Really?  How dark?  Chocolate brown? Mud-colored?  In the end, I went with his timer advice, cooking and stirring for about 15 minutes.  It did darken (see photos below), but I’ll never know if it was dark enough.

The gumbo was a lighter version of a soup, flavorful, a bit spicy (but not uncomfortable) and I actually liked dumping spoonfuls of the Cajun Jamalaya into the soup, enjoying the rice, shrimp, chicken and sausauge all together in my bowl.  It’s a fine gumbo on its own.

My advice? Prep all the ingredients before you start, because you are stirring the roux and won’t have time to stop and chop. 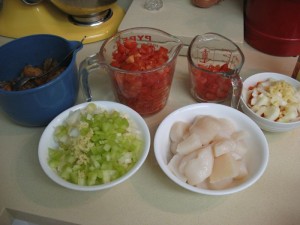 This is the prep for both dishes, the gumbo and the jamalaya.

Method
1. Put oil and butter in a large pot or Dutch oven over medium-low heat. When butter is melted, add flour and cook, stirring almost constantly, until roux darkens and becomes fragrant, about 15 to 20 minutes; as it cooks, adjust heat as necessary to keep mixture from burning. 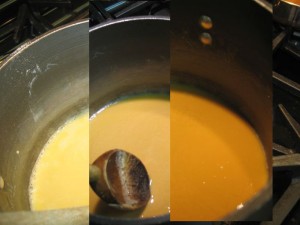 These are the stages of the roux as it darkened over 15 minutes.  I dumped in the vegetables when it was mud-colored. 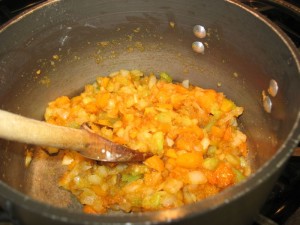 2. Add onion, bell pepper, celery and garlic and raise heat to medium. Sprinkle with salt and pepper and cook, stirring frequently, until vegetables have softened, about 10 more minutes.

2. Stir in the stock, tomatoes, thyme, oregano, bay leaves and cayenne. Cover, bring to a boil, then reduce heat so soup bubbles steadily. Cook for about 20 minutes or until flavors meld. Add scallops and cook until they are no longer translucent, about 2 minutes. Remove bay leaves. Taste, adjust seasoning and serve, garnished with parsley. 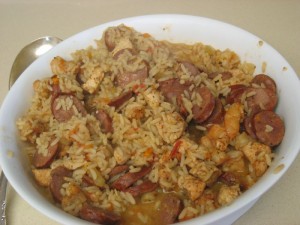 When I lived in Washington, DC for a year, the Washington Post newspaper had a really good food section that I loved to read.  When it was Mardi Gras time, they had Emeril Lagasse contribute one of his recipes to give us all a taste of “N’arlins” style food for our own celebrations.

I made this today in honor of the Saints football team getting into the Super Bowl.  I don’t follow football but I was cheering for the team that had come from New Orleans only because that city needed a boost in their fortunes.  I also found a recipe from Mark Bittman’s column this week for Scallop Gumbo and served it also.  I found I liked the two mixed together for some strange reason–try it some day. 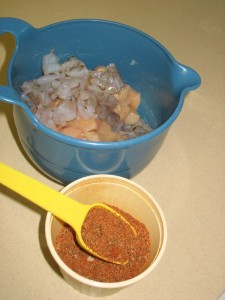 Reduce heat to medium and cook until rice absorbs liquid and becomes tender, stirring occasionally, about 15 minutes. I leave the lid off in order for the liquid to evaporate enough. When rice is just tender add shrimp and chicken mixture and sausage. Cook until meat is done, about 10 minutes more. Season to taste with salt, pepper and if desired, more Creole seasoning. 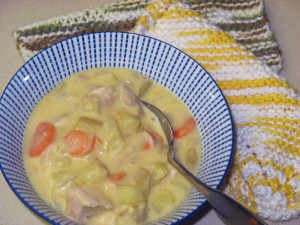 I was at a ladies auxiliary meeting for our church in Racine, Wisconsin.  It was a soup smorgasbord, and I was sort of picking and choosing which soup I’d like to try.  Marianne said to me: “Try this one.  You’ll love it.  It has Cheez Whiz in it.”  Even then I must have been a food snob because I said, “I’ll never eat anything with Cheez Whiz in it,” and passed it by.  Marianne started laughing.  “Go on, try it.  It won’t kill you.”

I tried it, and have been making it ever since, even though it has Cheez Whiz in it.  I know, I know.  But it’s amazingly good, and it hasn’t killed me yet.

Place the vegetables into a pan and pour a can of chicken broth over  them, just to cover.  Cook until tender, but not mushy.

In another pan, melt the butter then add the flour, cooking the roux until well-blended. Add the remaining can of chicken broth a little at a time to this pan, stirring to keep it smooth.  Dump in the vegetables, liquid and all into this pan, stirring to blend.  If it’s too runny, blend a little cornstarch with some cold water and add it to this mixture, stirring until it thickens.  If it’s too thick, add a little water.

Stir in the Cheez Whiz, promising not to make a face while you do it.  Then at the last minute, stir in the chicken.  We serve this with either oyster crackers from Trader Joe’s, or a loaf of La Brea bread. 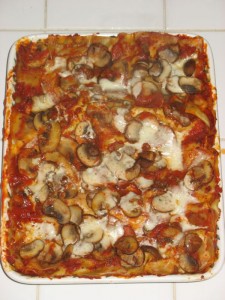 I don’t know how I dreamed up this dish.  I guess it was when I had to take something to a church supper, and I didn’t want another lasagna that weighed 40 tons on the plate and would send a person into cardiac arrest.  I wanted something that had a rich taste, but didn’t have the greasy, overloaded-with-cheese experience that is germane to this dish.  Now those types have their place.  Just not on my plate.

This recipe is open to variations, and is always a winner, even though that is a cliche.  I think the inclusion of the mushrooms give it a meaty taste, the vegetables bring it juiciness and the minimal cheese brings it richness.

We make this a lot in summer and it is really good leftover in lunch containers.  I like it also in winter as it is satisfying.  Okay, enough of telling you what it is and isn’t–the recipe follows with pictures.  Make it yourself and decide.

Ingredients:
about 1 pound crimini mushrooms, also known as brown mushrooms, cleaned and sliced
1 red sweet bell pepper, julienned
1 yellow sweet bell pepper, julienned
3 medium or 2 large zucchini, scrubbed clean and sliced
9 oz package of no-boil flat lasagne noodles (I use Barilla brand in a blue box)
1 jar spaghetti sauce (I use Ragu with extra mushrooms)
1/2 to 1 cup water
less than 8 oz. whole-milk mozzerella cheese, cut in thin slices (I use Precious brand, in shrink wrap)  I can’t give you an exact amount because while I use it sparingly, you may want more.

Start by sauteeing about a pound of mushrooms in a small amount of olive oil and butter (equal parts).  Don’t crowd the pan–do it in several bathes.  Then slice up the bell peppers and do the same. The zucchini needs the same workup.

Place about 1/2 cup of sauce in the bottom of a baking dish, approximately 9 by 13-inch size.  Spread the sauce to cover the bottom, then place a layer of noodles on top of that, covering the bottom of the dish.  It’s okay to break some in half if you need to do that, now, or later on.  Add water to the top of the spaghetti sauce jar, replace lid and shake to blend.

Top the noodles with about one-third of your mushrooms.  Spoon some sauce over that, then using a light touch, place the thin slices of cheese on top of that.  I do not cover the surface.  Instead it looks more like the red squares on a checkerboard, with the black squares being left devoid of cheese. 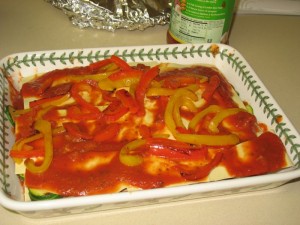 Layer in more noodles, more sauce, and then add about another 1/2 cup of water to the jar of sauce, shake to blend.  Your next layer can be the peppers, as shown above, or zucchini. There’s no set order, just alternate mushrooms, peppers, and zucchini until the pan is full. 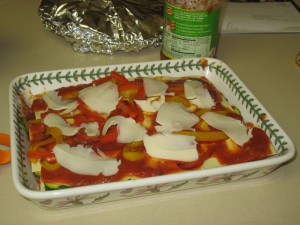 This is how I place my cheese: sparingly. I promise you that you won’t miss the excess.

Keep layering (this is the mushroom layer–I heap those babies on) until you end with noodles.  Or mushrooms, or whatever. Place the rest of the sauce on top of that (you can always slosh in some more water if you’re running low on sauce), then cheese. Stroke the dull side of a large piece of tinfoil with a cube of butter to grease it, then place it over your lasagna, crimping to seal the edges. 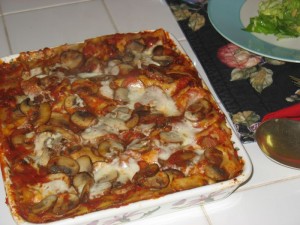 Bake in a 375-degree oven until bubbly, about 50-60 minutes.  If your cheese isn’t melted (take a peek), you can uncover your lasagna and bake for about 5 more minutes, until it is.  Let it stand for a about 10-15 minutes before serving, then enjoy!