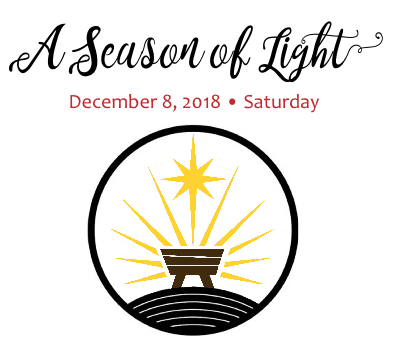 Herbed Pork Tenderloin wrapped in Prosciutto
(we used bacon for the dinner, but use prosciutto for home)

Recipe links for the women’s conference are at the end. 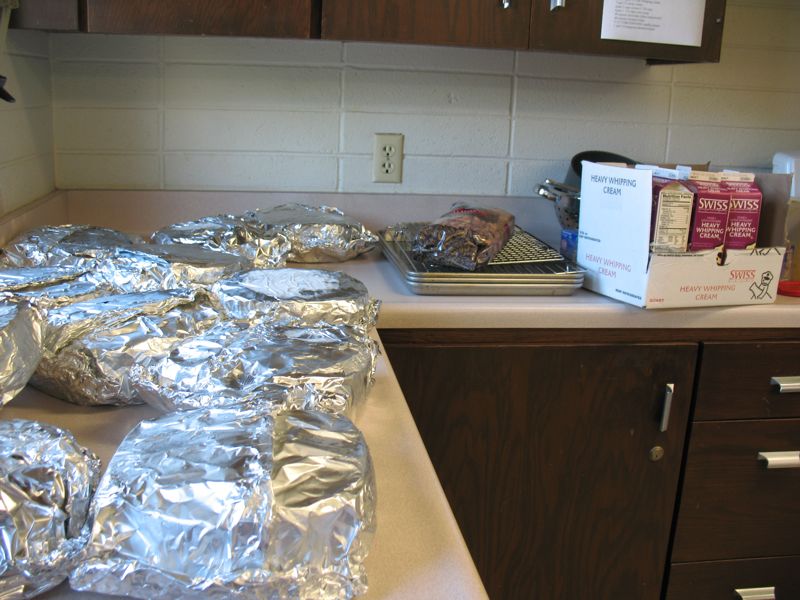 Here’s a photo of the wrapped cakes (11 batches of a triple-layer cake) and the vats of cream (for the ganache icing). 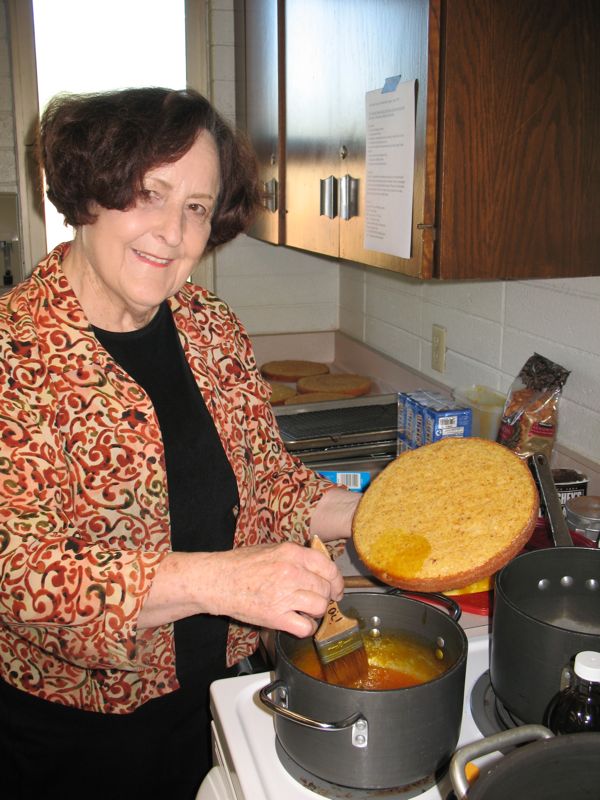 First step: Lora paints the “jam” on top of the cake.  It’s really just the orange juice, mixed with a small amount of sugar and boiled down by two-thirds. 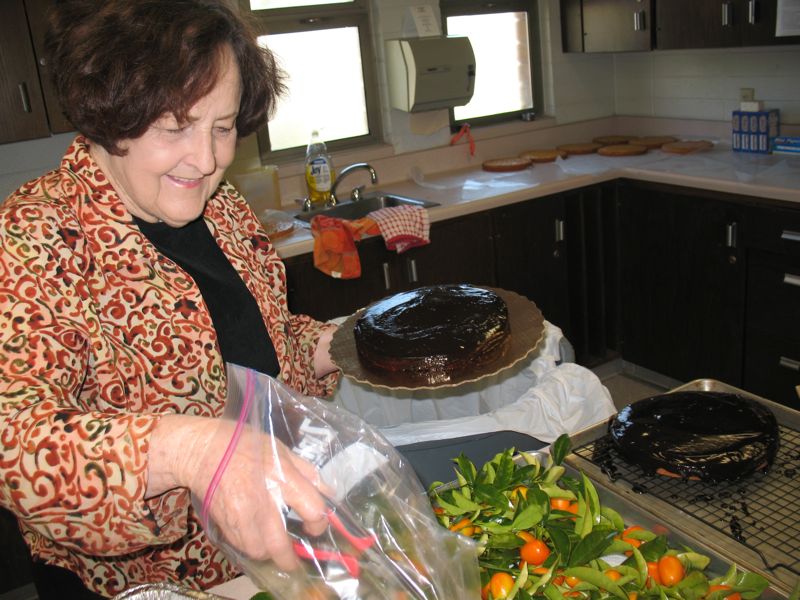 Cake is glazed, and now she’s going to put the prepared kumquat garnish on top. 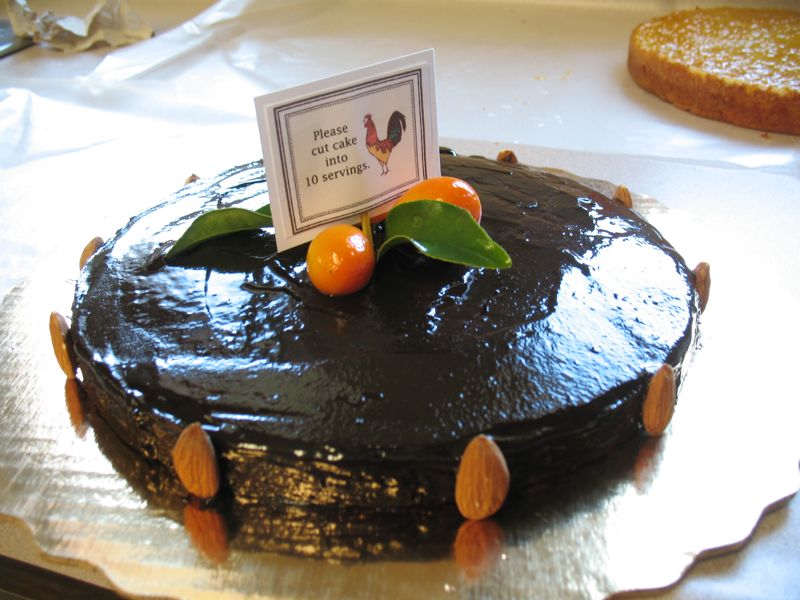 Cake decorated with almonds and ready to go out.  They’d be cut on the table, so we added a little sign to go with our RS Bistro theme. 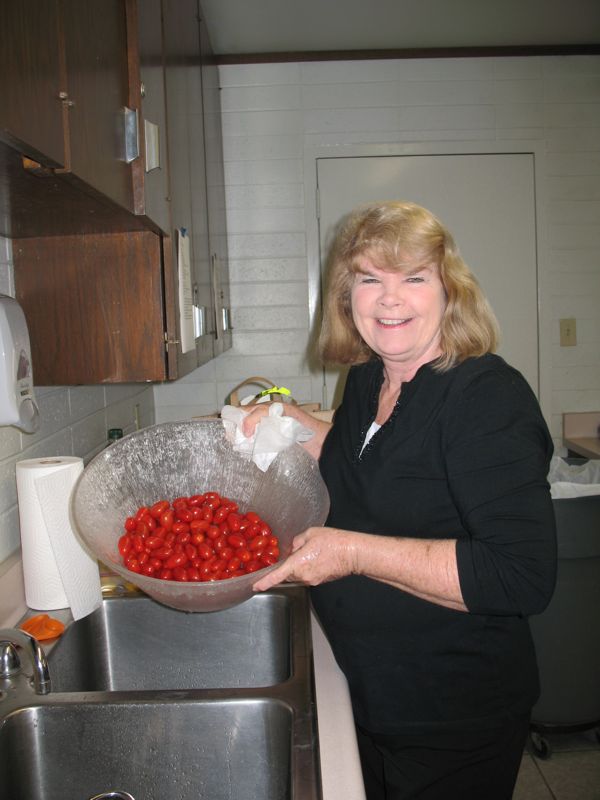 Sue washes the tomatoes, in preparation for the making of the garnishes. 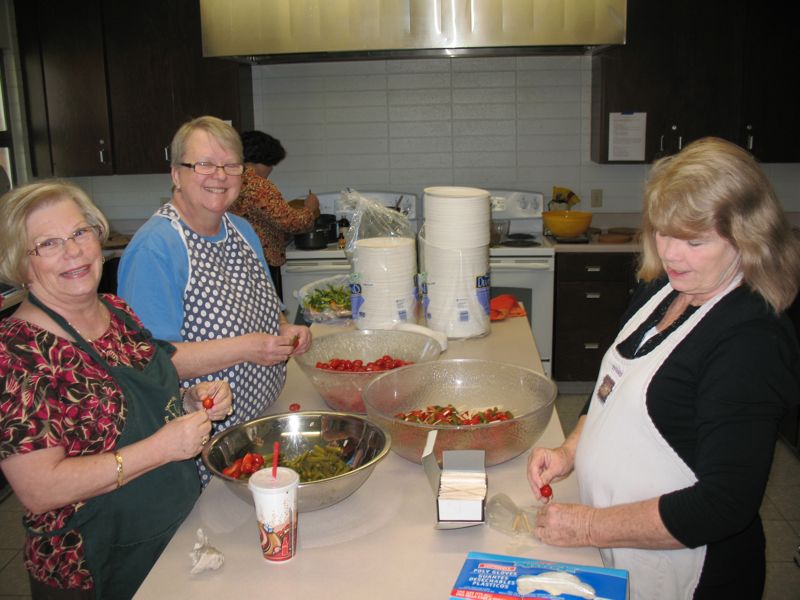 It was hard to get snapshots as we were all so busy, but I managed to capture Jana, Kristen and Sue spearing the tomatoes and cornichons (little French sour pickles). 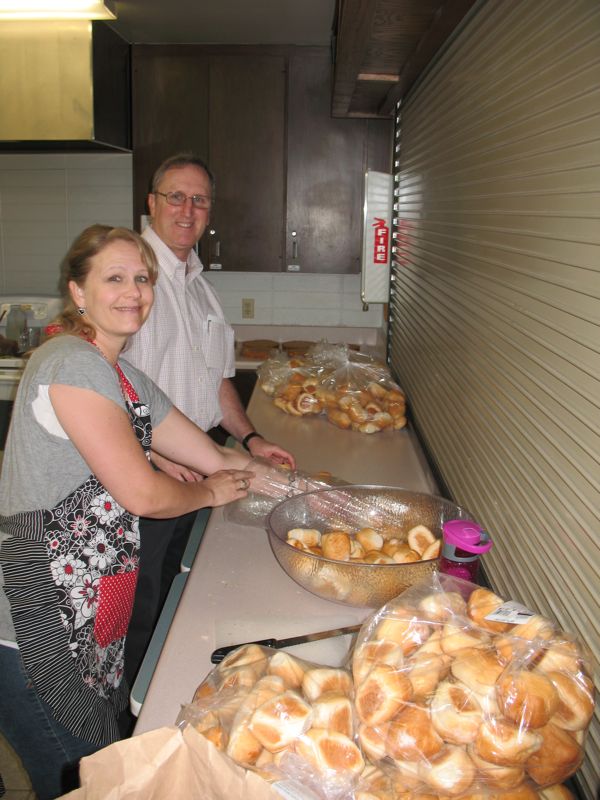 Dave and Carrie sliced open all thirty dozen rolls, then stuffed them with lunchmeats: ham or turkey.

All the salads we’d asked for showed up, and they were beautiful!  So the scene shifts here, to our prep table.  Robyn and Jana put out the spinach on the plates.  The salads and sandwiches are added, then topped with the garnish. 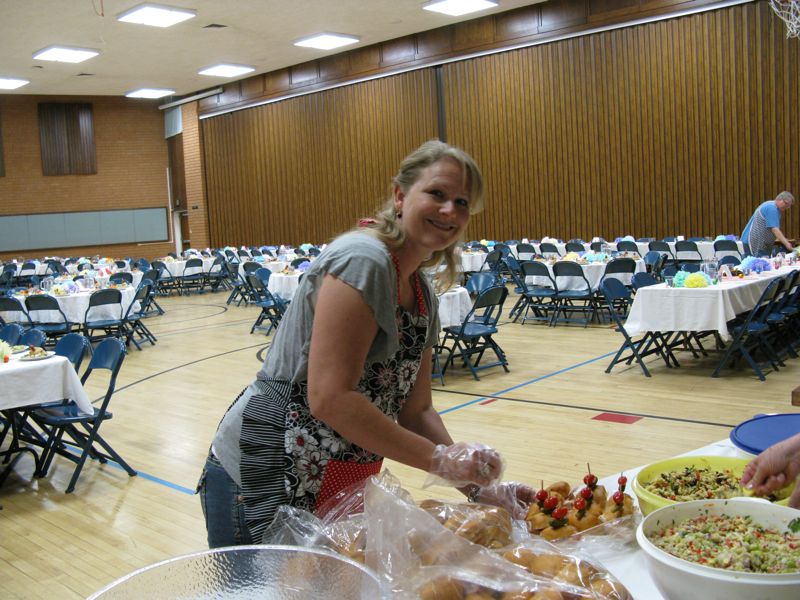 All hands on deck!  The women in charge of the conference had set up all the tables and chairs, set the tables and made the floral decorations.  It all looked so lovely. 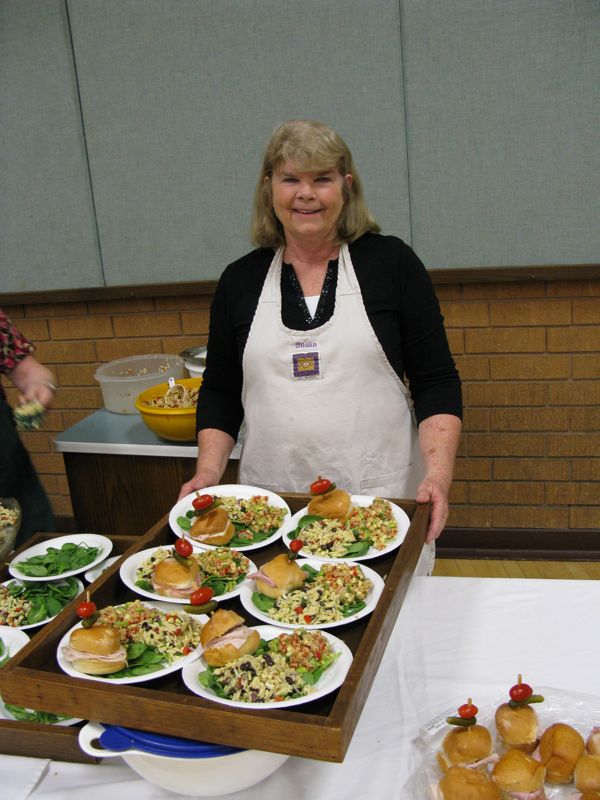 Plates ready to go out on the tables. 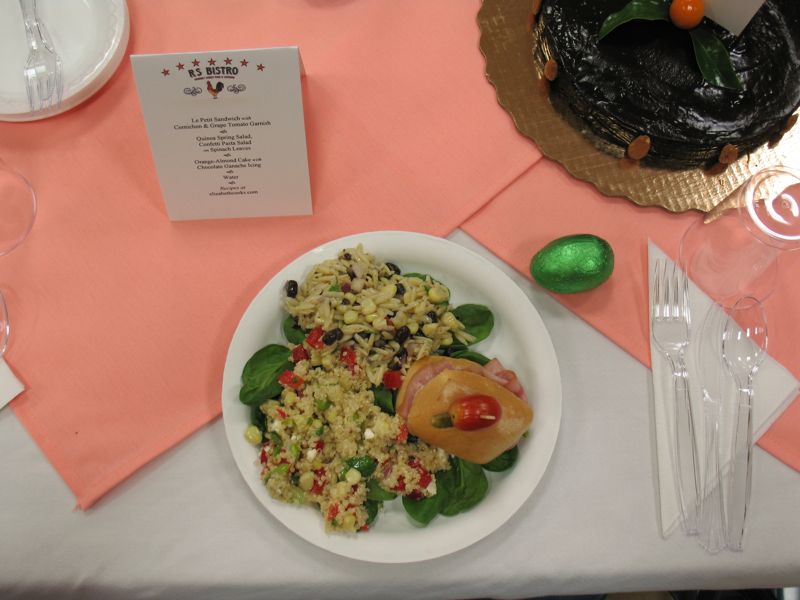 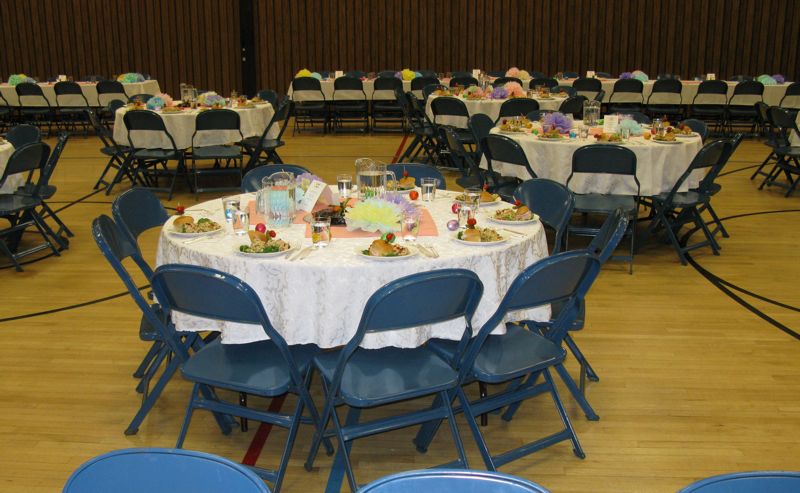 We had a combination of round tables and long tables. 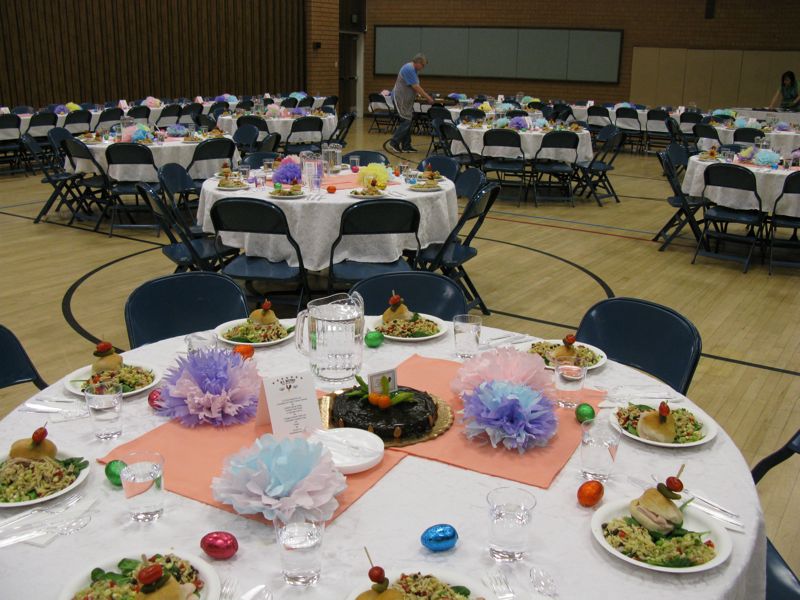 A couple more photos of the luncheon. 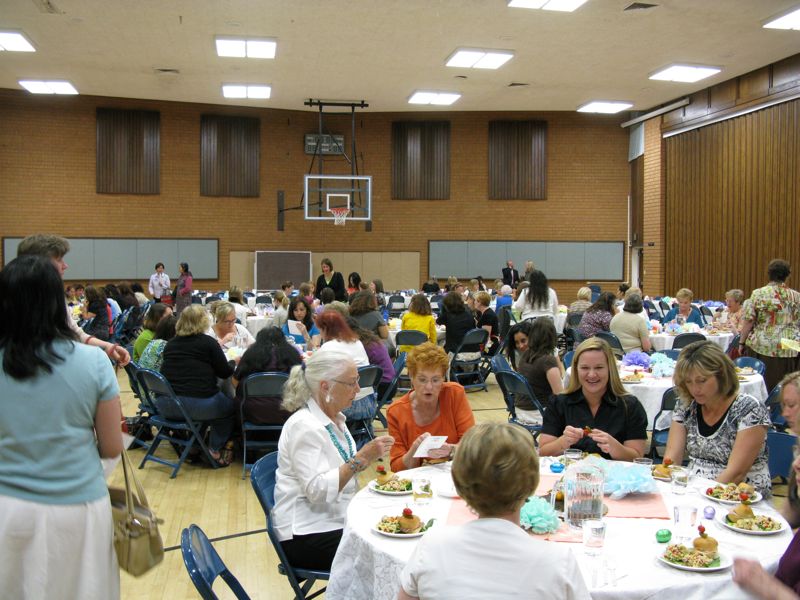 It is satisfying to take a look at this shot and realize all the hard work that has gone into this event.  We had over 15 salad makers, 8 members of our kitchen crew, 8 more helpers from a neighboring congregation.  This doesn’t even factor in all the countless hours spent by the organizers of this event: those who got the conference together, those who presented the workshops and the many who set up the physical needs of the conference in terms of tables, linens, and so much else.  Thank you to all!

There are two versions of each salad recipe on this website. 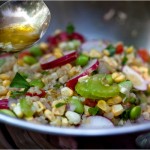 Here is the link to the WOMEN’S CONFERENCE Quinoa Sping Salad version, with lots of step by step photos; this salad makes 45 1/2-cup servings, or enough to feed a crowd.

Here is the link to the ORIGINAL version of Quinoa, Corn and Edamame Salad; it makes enough for 4-6 people, plus a little about the origins of the recipe. 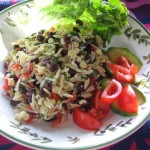 Here is the link to the WOMEN’S CONFERENCE Confetti Pasta Salad version, with lots of step by step photos; this salad makes 45 1/2-cup servings, or enough to feed a crowd.

Here is the link to the ORIGINAL version of Confetti Pasta Salad; it makes enough for 4-6 people, plus a little about the origins of the recipe. 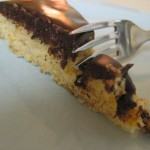 Here’s the recipe for the Orange-Almond Cake, and the link to icing is on that post.