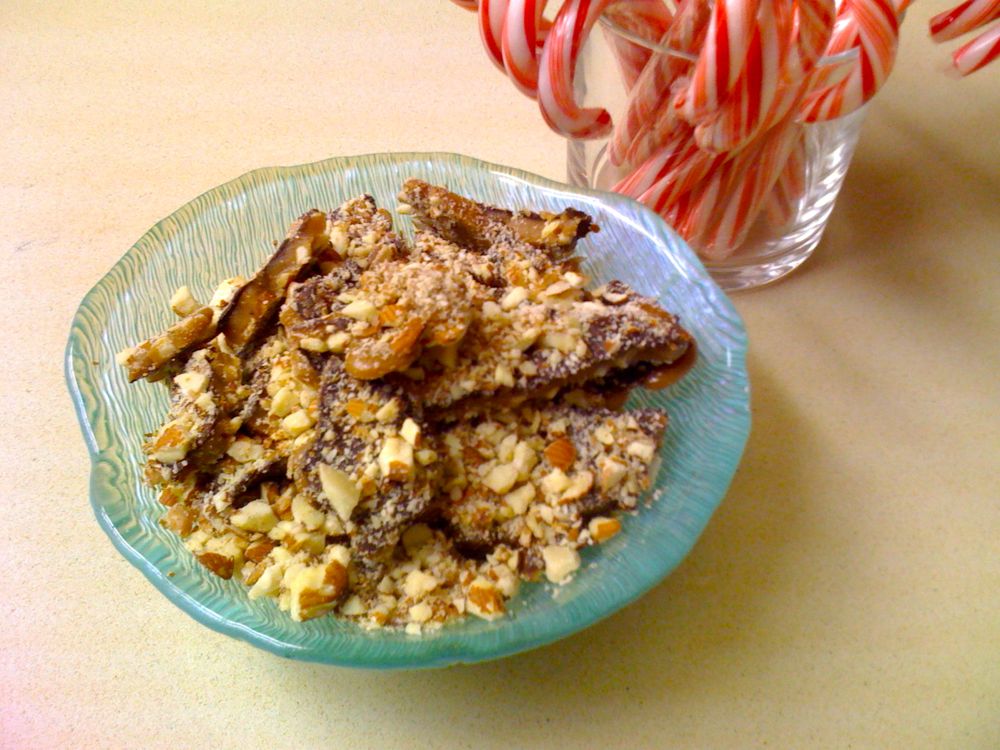 I found this in our local newspaper, back in the day when newspapers had full-fledged cooking sections.  In the olden days, back when newspapers were read every day around the breakfast/dinner table, there were many pages devoted to Christmas cookies, delectable sweets, ways to manage the Big Day’s meal, and lots of other columns imported from other news services.  I cut it out and tried it.  My husband, whose favorite candy at the time was Almond Roca, declared this recipe A Hit.  I’ve made it just about every Christmas since.  According to the article, it came from Ann Hodgman’s Beat This! Cookbook, published in 1993.  Now you know really how old this clipping is.  I’ve made some changes: the recipe as listed below includes these changes.

In a medium heavy saucepan, over medium to medium-low heat, melt the butter.  With a spatula kind of scoot some up on the sides so as to “butter the pan.”  As soon as the butter is melted, stir in the sugar. Continue to stir constantly until the sugar has dissolved and the mixture comes to a rolling boil (a boil that can not be stirred away).  Add the corn-syrup-water mixture and stir well; the mixture will hiss for a few seconds, but that’s all right.

With the pan still on the heat, cover the saucepan and leave it covered for 3 minutes (use a timer).  Then uncover it and stick in a candy thermometer.  Keeping the heat at medium-low, and stirring once in a while, heat the mixture to 300 degrees.  (My sister Christine also uses the paper bag test: she holds up a brown paper sack and when the toffee is that color, it’s time to yank it. *Note: for higher altitudes, for every 1000 feet above sea level, subtract 2 degrees.*)

When the candy finally reaches 300 degrees (it seems to get stuck at 220 and stays there for a long time), remove the candy from the heat immediately and pour it onto the chopped nuts, tilting the pan back and forth to cover it evenly.  The recipe says not to scrape the pan or the candy might crystallize, but I’ve been known to help down the last little ribbon of toffee mixture from the side with my spatula.  Other than that, I obey, and generally don’t scrape the pan. 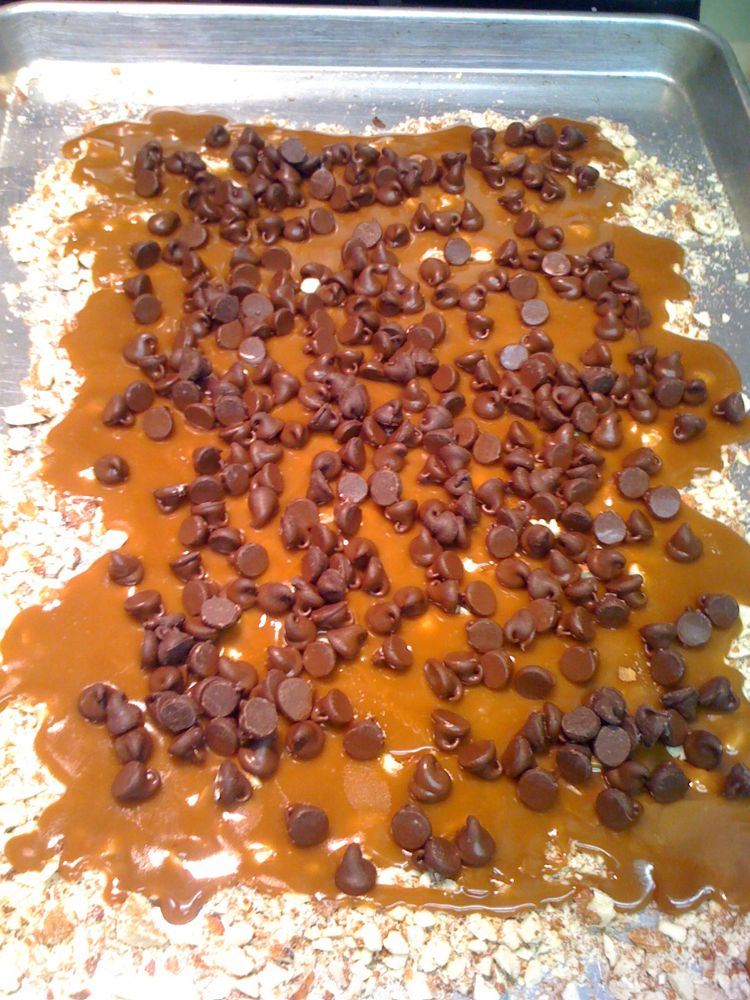 Let it cool for a few minutes, then scatter chocolate chips over the surface (another trick from my sister).  The heat from the cooling toffee will melt the chips. 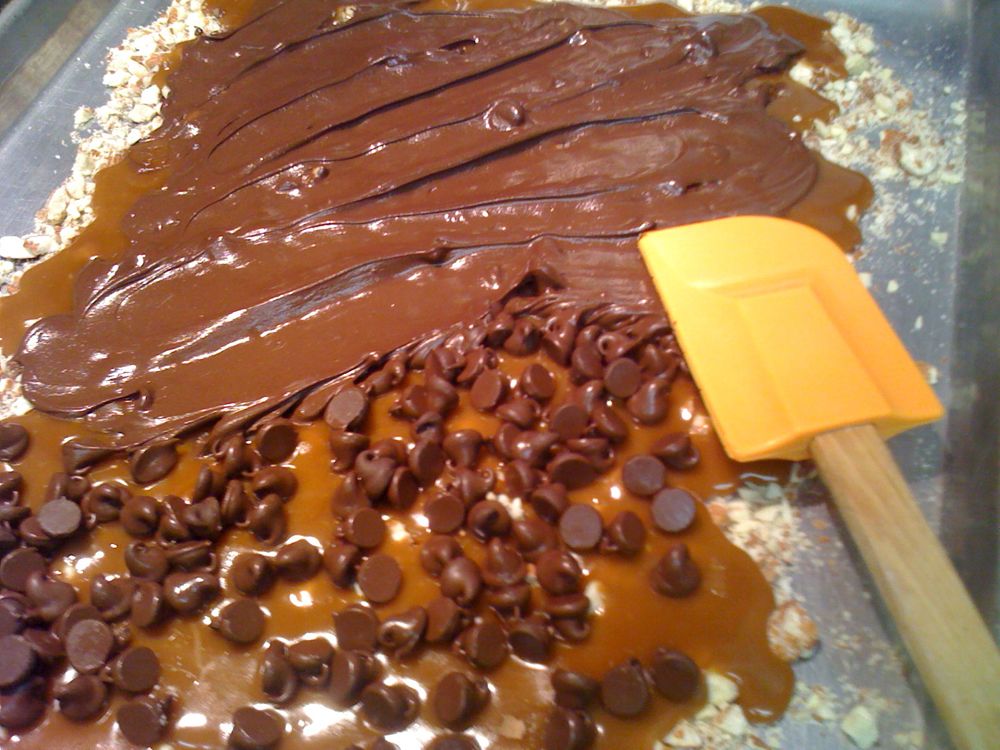 When they are melted, take a spatula and smooth out the chocolate. 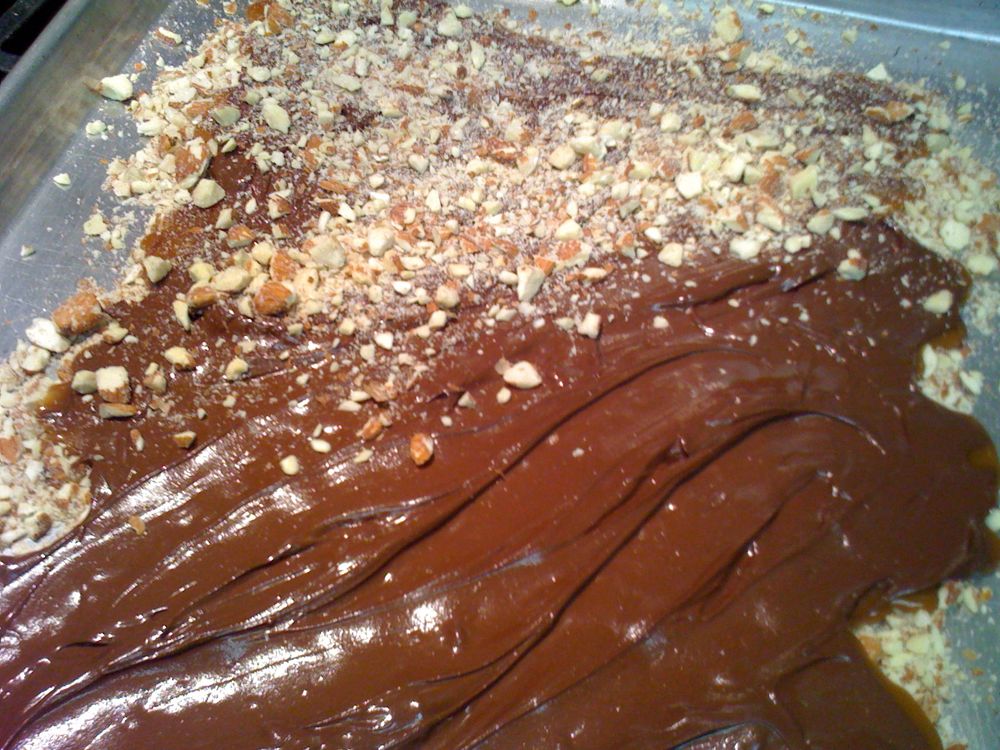 Then scatter the remaining chopped almonds over the surface.

Let it really cool down.  A lot.  When the chocolate is set (about 2 hours or so), break up the toffee into pieces by “stabbing” straight down into the toffee with a paring knife until you hear it break. More stabs equals smaller pieces.  I put it into a dish, then pour the extra bits of nuts and toffee over that.  Makes about 1 pound of candy.