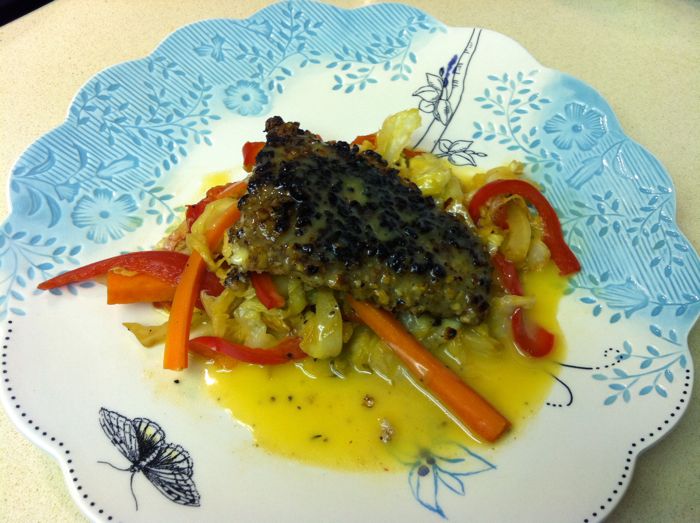 I got this recipe from–where else?–Bon Appétit, published in April 1996.  I’d been over to our local grocers and they had a fine selection of fresh fish.  I randomly selected trout, thinking of when we’d had it on our honeymoon in Austria.  We were in the hills above the town of Salzburg and the owner had diverted some of the mountain stream into a holding tank, where he farmed trout.  As we sat down to dinner that night, he asked us what size fish we would like.  We used our hands to gesture, as neither of us spoke German.  He went over behind us, and I heard some splashing, then a firm *whack*.  He held up two now-whacked-dead trout.  “Gut?” he asked, with a huge grin on his face.  We nodded. “Gut.”  And they were.  We even ordered one more and shared it.  When are you ever–except if you catch it yourself–going to have trout that fresh?

Bon Appetit addes this note: At the fish market, ask them to remove the head, tail and bones from the trout, then to cut each trout into two fillets, leaving the skin intact. Mine was already a fillet, so I didn’t have to do any of that.  We thought this was delicious.

Combine pecans and 1 tablespoon flour in processor. Grind pecans finely; transfer to plate. Place remaining flour on another plate. Sprinkle fish with salt and pepper. Dip 1 fillet into flour to coat; shake off excess. Using pastry brush, brush flesh side with egg whites. Place fillet, egg white side down, onto pecans; press to coat with nuts. Transfer to waxed paper-lined baking sheet, pecan side down. Repeat with remaining 3 fillets; chill.

Combine first 7 ingredients in medium saucepan. Boil 10 minutes; add rosemary. Boil until liquid is reduced to 1/2 cup, about 10 minutes. Strain sauce into another medium saucepan, pressing on solids in sieve. Add cream; bring to boil. Reduce heat to medium-low. Whisk in butter 1 piece at a time (do not boil). Season with salt and pepper. Let stand at room temperature up to 2 hours.

Whisk sauce over low heat to rewarm (do not boil). Divide vegetables among plates. Top with fish. Spoon sauce around fish and vegetables. Sprinkle with chopped chives and serve.