When I saw the movie Julie/Julia, I really wanted that recipe for the bruschetta Julie and her husband eat in the first scenes.  Of course, he was acting, but the way he went over the moon for the crisp slices of baguette topped with fresh tomato made it all the more appealing.

We’d had some “bruschetta pomodora” together, Dave and I, on our last trip to Italy in Montepulciano–a little town in the hills (above). 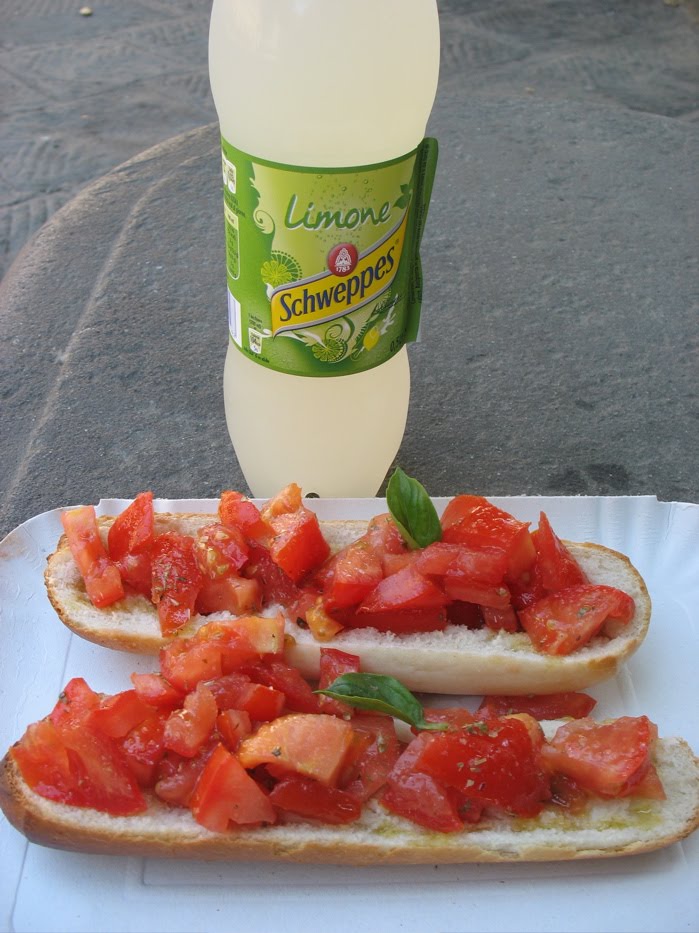 I’d also had a wonderful version earlier, while lunching in Florence (above). All of those appeared to depend on fresh tomatoes (not grocery store), good quality bread, and high-grade olive oil, and not much else.

Fast forward to today.  A perfect trio of happenings all conspired to deliver to our dinner plates the same meal.  First, some ciabatta bread from Kneaders Bakery in Orem, Utah had survived the trip home, and after a sojourn in the freezer, Dave pulled it out trying to decide what to do with it.  Second, our neighbor, Julie, had too many tomatoes and brought over two large red toms along with a handful of little yellow pears tomatoes.  Third, a version of this recipe appeared in the Sunday Magazine and I ripped it out immediately.

Ingredients:
2 large red tomatoes, handful of golden pear tomatoes, or 2 lbs. assorted heirloom/garden tomatoes, diced
2 cloves garlic, chopped or pressed through a press (if you do that, scrape what’s left behind, and press it through again)
1/4 to 1/2 cup basil leaves, thinly sliced (adjust as needed–we used about 10 leaves from our garden plant)
3 Tbsp red-wine vinegar (or several splashes)
1/4 cup olive oil
salt and fresh pepper

Place the tomatoes, garlic, vinegar, 1/4 cup olive oil and the basil into a medium bowl and stir to combine.  Season with salt and pepper and let sit at room temperature for 30 minutes to allow the flavors to meld.

Prepare the crostini. You can either follow the directions in the linked recipe (it’s on this site), or grill it on the outside barbeque grill, or do what Dave did: lay out the thinly sliced bread (about 3/8″ thick) on a cookie sheet.  Brush with olive oil, and broil under high heat until golden brown and crisp.  He took out the center crostini that were done first and redistributed the others more evenly under the heat.

Build your bruschetta: mound the tomatoes, including some of their juices, up onto the bread and eat immediately.  We made each delicious serving at the time of eating, as the bread quickly soaks up the juices and would get soggy if it sat at all.

Optional: add in about 1/2 thinly sliced red onion.  We decided that our servings in Italy didn’t have onion, so we left it out.

Another Optional: place a slice of fresh mozzerella cheese (the kind that’s sold with liquid around it–a soggy looking thing) on top of the crostini before you place the tomatoes over it.  We had that, and the meal was amazing.  And we weren’t even acting!

History of the Terms (from Wikipedia):
Bruschetta (Italian pronunciation: [brusˈketta]) is an appetizer from central Italy whose origin dates to at least the 15th century. It consists of grilled bread rubbed with garlic and topped with extra-virgin olive oil, salt and pepper. Variations may include toppings of spicy red pepper, tomato, vegetables, beans, cured meat, and/or cheese; the most popular recipe outside of Italy involves basil, fresh tomato, garlic and onion or mozzarella. Bruschetta is usually served as a snack or appetizer.

And this interesting note: Following a semantic shift, some Americans use the word “bruschetta” to refer to the topping instead of the dish. Many grocery store chains in the United States sell bottled “bruschetta,” which is typically tomatoes, onion, garlic, and herbs.

Definitely not as good as the one we enjoyed tonight.

2 thoughts on “Tomato Bruschetta on Crostini”