The tongue-in-cheek joke in our house is that this is known as “Elizabeth’s Award-winning dessert.” I was dating my husband at the time, and served some to him, proudly announcing that it had won a blue-ribbon at the fair. I was beaming. True to his scientific ways and analysis (in every aspect of his life), he asked, “And how many entries were there?” I pulled a face. He went on eating it. I’ll never tell how many entries in my category there were; to me it’s a blue-ribbon winner all the way.

Method:
Mix together nuts, sugar and cinnamon, set aside.

Sprinkle 1/3 of the nut mixture on top of this layer.

Layer two leaves of filo on top of nuts.  Brush with butter.  Layer on 4 more sheets, one at a time, brushing each with butter.

Sprinkle 1/3 the nut mixture on top of that last layer.

Layer two leaves of filo on top of nuts.  Brush with butter.  Layer on 4 more sheets, one at a time, brushing each with butter.

Sprinkle last 1/3 nuts on top.  Repeat layering of filo until all leaves are used.  Brush top layer with butter.  With a small sharp knife, score the top of the pastry with parallel diagonal lines about 1/2-inch deep and 2 inches apart, then cross them diagonally to form diamond shapes.  Bake in the middle of  a 350°F oven for 30 minutes.  Reduce the heat to 300°F and bake for 45 minutes longer, or until the top is crisp and golden brown.

Combine sugar, water and lemon juice in a small saucepan and, stirring constantly, cook over moderate heat until the sugar dissolves. increase the heat to high and, timing it from the moment the syrup boils, cook briskly, uncovered, for about 5 minutes.  Remove the pan from the heat and stir in the honey.  Pour the syrup into a pitcher or other pouring container and set aside.

When the baclava is done, remove it from the oven and pour the syrup over it, slowly, up and down all the rows and across. Cool to room temperature, and just before serving, cut through the scored lines to the bottom of the pan, yielding diamond-shaped pieces. 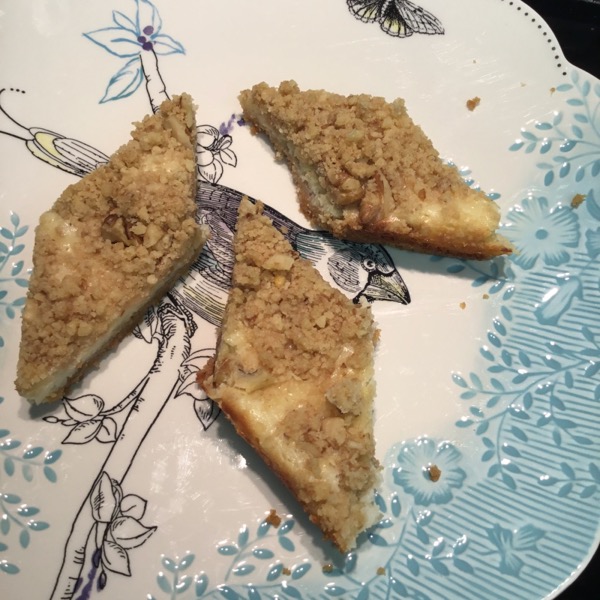 Scoop out 1 full cup of this topping and reserve.  Press the remainder down firmly and evenly into pan.  Bake for 12-15 minutes in hot oven.  [NOTE: if using a glass pan, set oven temperature to 325.]

In a separate bowl, mix together:
2 softened 8-ounce packages cream cheese (I use Trader Joe’s), and 1 cup granulated sugar until creamy. 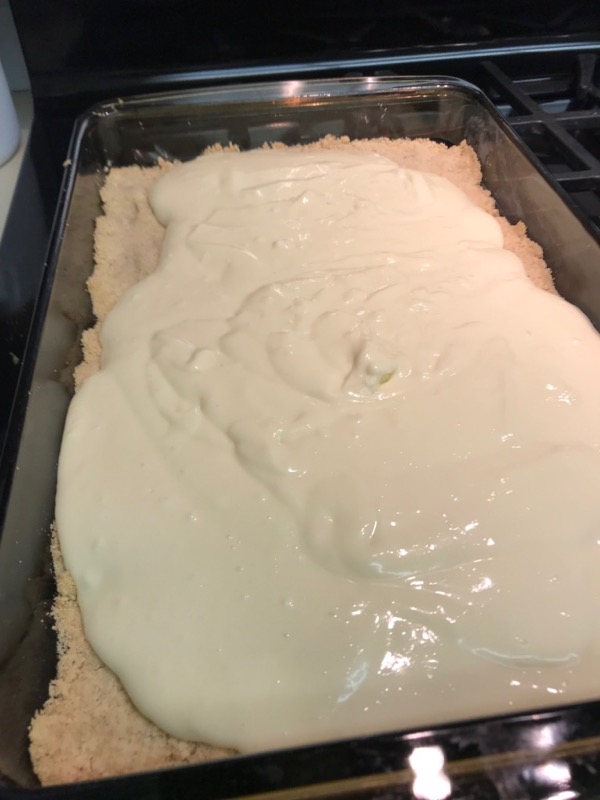 To reserved topping, add 1/4 cup chopped walnuts, mix.  Sprinkle over the filling.  Return to the oven and bake 25 minutes more.  Cool, then cut into diamonds or squares. Keep refridgerated. 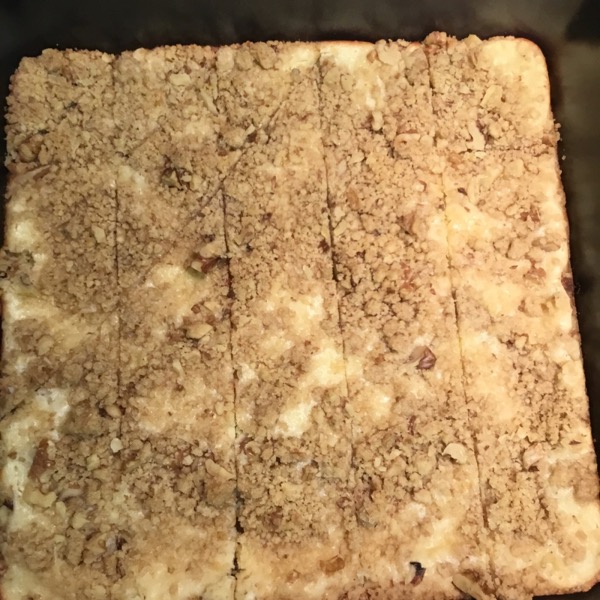 To cut into diamonds, make parallel cuts the length of the pan.  Then cut across them at a 45 degree angle, forming diamonds.  There will be odd-shaped pieces in the corners: Cook’s taste!

(You know how to cut into squares.) 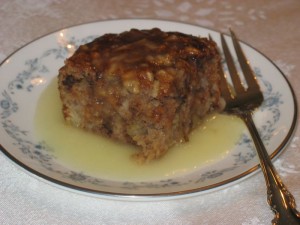 Who knows where I got this recipe, but it’s been a favorite of mine to serve at Christmas for just about forever.  For Thanksgiving it was always pumpkin and mincemeat pie, and for Christmas, it’s Gingerbread Cake and this.  It’s a moist cake with strands of fresh apple, crunchy walnuts and an old-fashioned English-cake-pudding texture.  It’s best served with Elizabeth’s Lemon Butter Sauce.

Sift together flour, cinnamon, salt, baking soda and nutmeg in one bowl.  In another bowl, whip together thoroughly: butter, sugar and egg until light and fluffy.

Add the grated apples to the egg mixture then blend in flour mixture.  Lastly add nuts and stir until blended.  Bake in greased 9 x 9 pan at 400 degrees F for 20-30 minutes.  Do Not Overbake!

I lived in Texas for four very warm years, as I was always surprised at how long into November I wanted to have the air conditioning running.  It made it hard to get into the “holiday spirit” when trying to bake pumpkin pies when it was 85 degrees outside.  A few of us got together one Christmas and decided to recreate An Olde English Repast for our ladies church program, figuring by going back to the Dickensian source would alleviate our homesickness for some frosty weather.  We made roast beef, Yorkshire pudding, corn pudding, a moist apple cake and of course, a Gingerbread Cake. I found the recipe in an old Sunset recipes book, which is so old, it’s falling apart.  We served it with Elizabeth’s Lemon Butter Sauce.

In a bowl, combine the sugar, salt, ginger, cinnamon, and cloves. Stir in the salad oil, then the molasses, mixing well.  Mix the soda into the boiling water and immediately stir into the mixture.  Gradually blend in the lfou, to prevent lumping.  Then mix in the eggs.

One day last month when I was trolling through my Google Reader, link led to link led to a site where a librarian for the Los Angeles Library System had determined to make better use of her bundt pan, and so was posting a bundt cake a day.  I found her early in the cycle and never returned, but did harvest this recipe, orginally published in November 2005 in Gourmet Magazine (may it Rest In Peace–and I was just about to subscribe to it, too!).

The other night we had three guests for dinner and I needed a quick dessert.  I whipped this up (yes, it’s really easy, though the mixing of the pumpkin with the buttermilk is unconventional), drizzled the frosting over the top and it was a hit at dinner.  I cut up the extra pieces, gave some away and Dave’s been taking a slice in his lunch all week.

Whisk together flour (2 1/4 cups), baking powder, baking soda, cinnamon, allspice, and salt in a bowl. Whisk together pumpkin, 3/4 cup buttermilk, and vanilla in another bowl.

Beat butter (1 1/2 sticks) and granulated sugar in a large bowl with an electric mixer at medium-high speed until pale and fluffy, 3 to 5 minutes, then add eggs and beat 1 minute. Reduce speed to low and add flour and pumpkin mixtures alternately in batches, beginning and ending with flour mixture and mixing until batter is just smooth.

Spoon batter into pan, smoothing top, then bake until a wooden pick or skewer inserted in center of cake comes out clean, 45 to 50 minutes. Cool cake in pan on a rack 15 minutes, then invert rack over cake and reinvert cake onto rack. Cool 10 minutes more.

Cooks’ note: Cake can be made 3 days ahead and kept in an airtight container at room temperature. 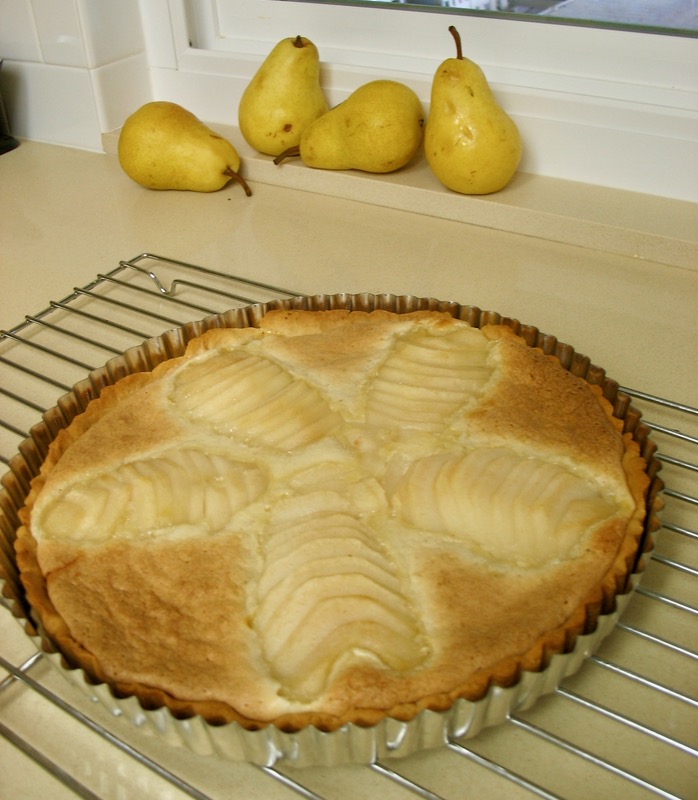 First you make the tart shell, and I love her advice to freeze it first.  Then the almond cream.  Let me just say: Blanched almonds? Converting regular almonds to blanched involves dunking them in boiling water for 60 seconds (no more), then rinsing them in cold water.  Then the skins can be pinched off, using thumb and forefinger.  (Videos can be found online, or you can just purchased blanched almonds).

To make the dough:  Put the flour, confectioners’ sugar and salt in the work bowl of a food processor and pulse a couple of times to combine.  Scatter the pieces of butter over the dry ingredients and pulse until the butter is cut in coarsely – the pieces will be the size of oatmeal flakes and pea-size pieces and that’s just fine.  Stir the egg, just to break it up, and add it a little at a time, pulsing after each addition.  When the egg is in, process in long pulses – about 10 seconds each – until the dough, which will look granular soon after the egg is added, forms clumps and curds.  Just before your reaches this clumpy stage, the sound of the machine working the dough will change – heads up.  Turn the dough out onto a work surface.

If you want to press the dough into a tart pan, now is the time to do it.

If you want to chill the dough and roll it out later (doable, but fussier than pressing), gather the dough into a ball (you might have to use a little more pressure than you used to mix in dry bits, because you do want the ball to be just this side of cohesive), flatten it into a disk, wrap it well and chill it for at least 2 hours or for up to 1 day.

To make a press-in crust:  Butter the tart pan and press the dough evenly along the bottom and up the sides of the pan.  Don’t be stingy – you want a crust with a little heft because you want to be able to both taste and feel it.  Also, don’t be too heavy-handed – you want to press the crust in so that the pieces cling to one another and knit together when baked, but you don’t want to press so hard that the crust loses its crumbly shortbreadish texture.  Freeze the crust for at least 30 minutes, preferably longer, before baking.

To partially bake the crust:  Center a rack in the oven and preheat the oven to 375 degrees F.  Butter the shiny side of a piece of aluminum foil and fit the foil tightly against the crust.  Bake the crust 25 minutes, then carefully remove the foil.  If the crust has puffed, press it down gently with the back of a spoon.  Bake for another 3 to 5 minutes, then transfer the crust to a cooling rack; keep it in its pan.

Confectioners’ sugar for dusting, or apple jelly for glazing

To make the almond cream:  Put the butter and sugar in the workbowl of a food processor and process until the mixture is smooth and satiny.  Add the ground almonds and continue to process until well blended.  Add the flour and cornstarch, process, and then add the egg.  Process for about 15 seconds more, or until the almond cream is homogeneous.  Add the rum or vanilla and process just to blend.  If you prefer, you can make the cream in a mixer fitted with the whisk attachment or in a bowl with a rubber spatula.  In either case, the ingredients are added in the same order.  Scrape the almond cream into a container and either use it immediately or refrigerate it until firm, about 2 hours. (I had mine in the fridge for about 1 hour–worked fine.)

Getting ready to bake:  Center a rack in the oven and preheat the oven to 350 degrees F.  Have a lined baking sheet at the ready.  Peel the pears, cut them in half from blossom to stem and core them; rub them with lemon juice.  Then put them on some paper towels and pat them dry – really dry – so that their liquid won’t keep the almond cream from baking. 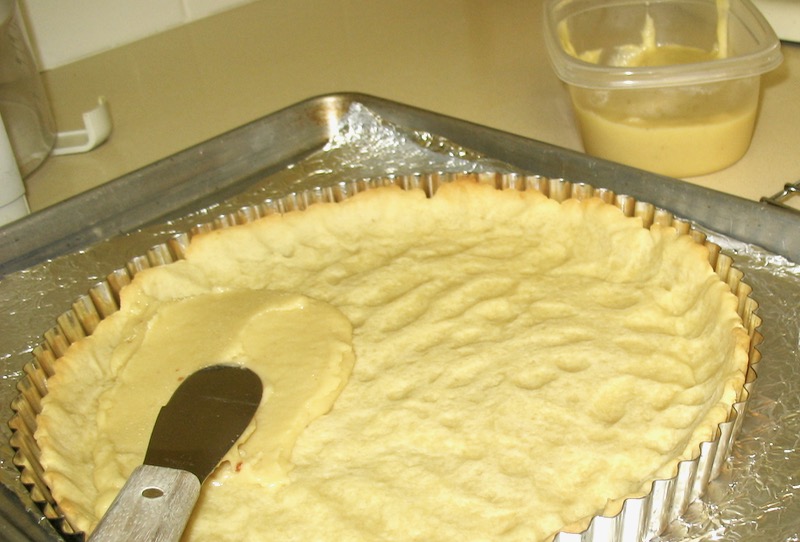 Fill the baked crust with the almond cream, spreading it evenly. 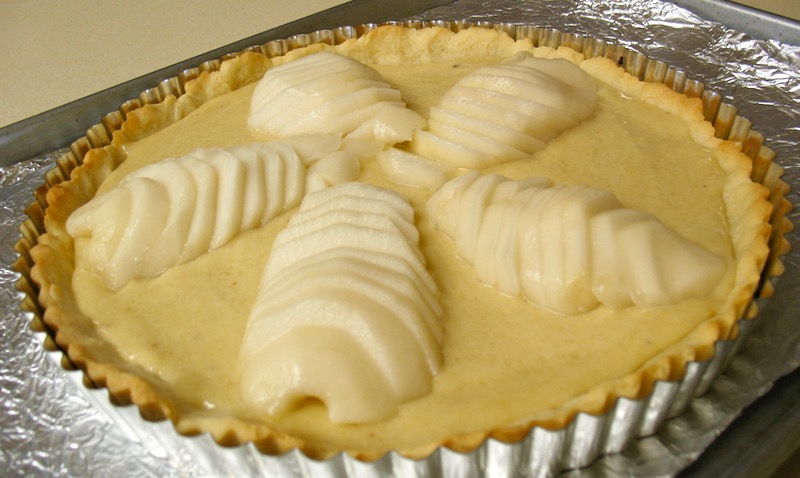 Thinly slice each pear half crosswise, lift each half on a spatula, press down on the pear to fan it slightly and place it, wide-end toward the edge of the crust, over the almond cream.  The halves will form spokes. (I only used five halves, using the other for a little cook’s snack.)

Put the crust on the lined baking sheet, slide the sheet into the oven and bake the tart 50 to 60 minutes, or until the almond cream puffs up around the pears and browns.  Transfer the tart to a rack to cool to just warm or to room temperature before unmolding.

Right before serving, dust the tart with confectioners’ sugar.

Her notes about storing:  You can make the almond cream up to 2 days ahead and keep it closely covered in the refrigerator, or you can wrap it airtight and freeze it for up to 2 months; defrost before using.  However, once you’ve baked the tart, you should be prepared to enjoy it that same day.