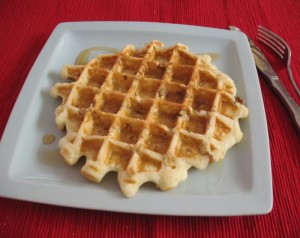 Maybe I had some leftover buttermilk that first time I made these, or maybe I just wanted some waffles.  Who knows?  These waffles are from the pages of a well-used, splattered and worn cookbook: The Joy of Cooking.  It was  my go-to cookbook when I was a young bride of 19-and-a-half, alongside the red-checkered Better Homes and Gardens Cookbook. Years later I laughed out loud when in the movie Julie/Julia, the actress playing Irma S. Rombauer, the cookbook’s author, admits to not testing all the recipes.  I’d say this one’s been well-tested in my kitchen and it is a success every time. 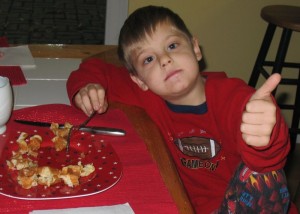 Recently we had the grandchildren over and Alex told me he didn’t like waffles.  “But, Alex,” I said.  “You haven’t had MY waffles.”  Above is his response to tasting them: a hearty thumb’s up.  He had nearly three.  We like them drizzled with warm REAL maple syrup, not that fake stuff in the grocery store (check Trader Joe’s).  That habit–of real syrup–was inherited from my father, who had shipped to him six 1-quart tins of real maple syrup from a farm in Vermont every year when we were growing up, and for many years after that.

Plug in your preferred waffle iron to heat.  If you are using it for the first time, have a bowl with some shortening in it along with a stiff pastry brush to season the grids.  As the Joy of Cooking notes: “Once conditioned, the grids are neither greased nor washed.  You may brush the iron out to remove any crumbs.  After use, merely wipe down the outside with a cloth well wrung out in hot water.”  Last thing from the cookbook: “You may think our waffle recipes heavy in fat.  But the richer the waffle dough, the crisper it becomes.  With the butter flavor baked in, there is then no reason for butter on top of it.”  Amen.  Just some warm syrup in a cute little pitcher.

In a small bowl, beat until stiff, but not dry:
2 egg whites.  Set aside.

Fold the egg yolk/buttermilk mixture into the dry ingredients with a few swift strokes.  Fold in the egg whites.

Bake in a prepared waffle iron, using a spoon to catch any excess that may ooze out.  After baking, there’s a temptation to open it too soon, and to split the waffle in half.  I usually watch to see if it is still steaming, and try and catch it at the end.  I lift the upper part with a light touch, and if there is too much resistance, I let it bake a little longer.  The only caveat is: if you haven’t seasoned the grids much, it may stick on the top as you raise the lid.  Have a fork handy to help it off, then put some shortening on the upper lid to season it some more. 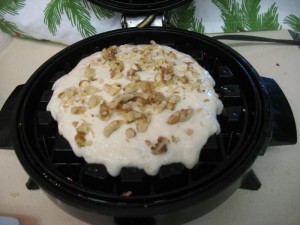 I show above a tradition of my mother’s: adding chopped walnuts, sprinkled over the top of the dough just before closing the lid to bake.  She has also added mini-chocolate chips on occasion, but the nuts are my very favorite.  Shown above is a Belgium-style waffle iron with big fat grids.  Not my favorite. 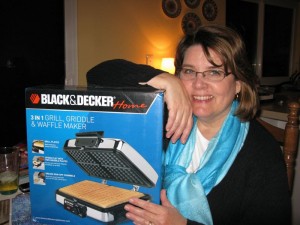 So, for my birthday my husband gave me an old-fashioned waffle iron with normal grids–more pockets for the syrup to collect in without the waffle getting soggy.  The yield in the big waffle iron (shown above) is about 5-6, but they break into fourths, so you can feed a few at once.  (But I usually always double the batch for a crowd.)  I keep the baked, but not yet eaten, waffles in the oven at about 200 degrees while I’m serving breakfast, then throw the uneaten ones directly into the freezer.  After they are frozen, I place them in ziploc baggies and we toast them in our toaster whenever we want a waffle.