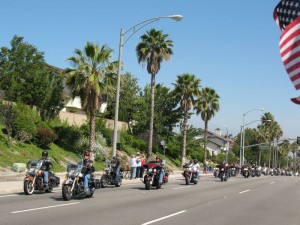 The morning of Memorial Day found us out on the median of a major street, waving flags and cheering on the riders in West Coast Thunder 2010 as they rode up to our local VA cemetery.  We’ve tried to do this every since experiencing the rush of East Coast Rolling Thunder while we lived in DC.

Some of our neighbors were there, and on the spur of the moment, I invited them to a barbecue later that afternoon.  This was a good thing: I had to actually prepare a dinner, and we had to sweep the patio and wash off the outside furniture–items that we’d always been more than happy to put off for later.

and for dessert our friends brought Texas Sheet Cake.

Click on the links to head to the recipes.  To make corn on the cob, buy fresh corn.  Shuck it, rinsing off the silks.  Bring a pot of water to boil, drop in the corn and TURN IT OFF.  Set the timer for 4 minutes, take out the corn and slick it down with butter.  Pass salt and pepper at the table.  My dad bought me these nifty corn holders.  They nest into each other in the drawer so you aren’t stabbing yourself when you rummage around in there.  Yes, I retired the old holders.

There are a billion recipes for Texas Sheet Cake on the web, as it’s been around for upteem years.  That’s why it made me laugh when Pioneer Woman claimed if for her own.  Yeah, right.  Like you can claim this one. Follow her recipe, but instead of *milk* in the frosting, use *buttermilk.*  Then it’s correct.  We’re also a walnut-loving  family–so we use those instead of pecans.

One thought on “Memorial Day Barbecue, 2010”